Over the summer we worked with Dorset County Hospital to make a series of films about Mental Capacity Assessments. The series aimed to support staff, when they were faced with difficult situations where an assessment was necessary. We needed to reinforce key principles and assessment tools for staff to apply to their work. 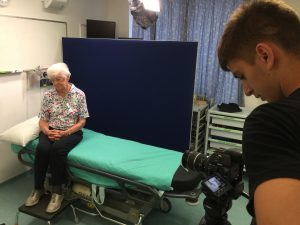 From the outset we knew the films needed to be clear and engaging to really have an impact on the intended audience, they had to be something that viewers could genuinely relate to.  So we got to work on designing and producing a series of films that would do exactly that.

We decided to use real life scenarios of how assessments would be carried out in practice. We worked with hospital staff to produce two likely situations and filmed them on wards in Dorset County Hospital, with a nurse, Jane, playing herself in the scenarios. 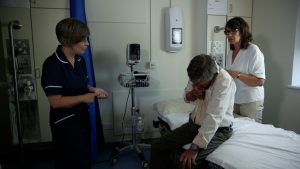 Two local, professional actors, Tim and Alison, played parts in one of the scenarios, alongside Jane, our nurse. Their professionalism certainly added to the authenticity of the film.

We worked with a local charity for people with a learning disability, People First Dorset, to identify someone who could act in one of the scenarios. We ran several workshop days to help potential participants understand what would be involved in filming and at the end we chose two people to play roles in this film.

In each film we decided to use a presenter. He recapped on how principles were applied in the scenario and ran through assessment tools such checklists. Our presenter James was able to do this very well, his style of presentation was warm and engaging.

A local music producer Matt Tarling produced a bespoke sound track for the films, to ensure we were setting exactly the right tone and pace.

We thoroughly enjoyed working with everyone who was involved in making the films and thank everyone so much for all their hard work.

We are delighted with the end result and are so pleased we were asked to produce such a valuable resource for hospital staff.

Check out the films we made below....